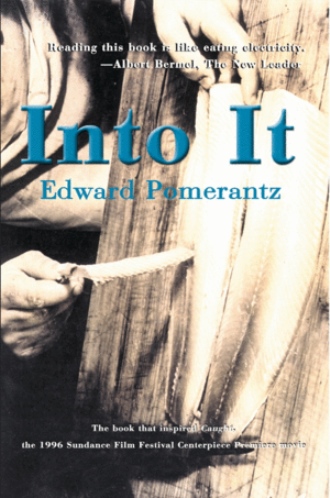 This powerful short novel introduces a writer of extraordinary accomplished talents, a highly developed craftsman with a keen mythic edge to his fiction.

Nick, the young narrating protagonist of Into It, on the run from a traumatizing mother, falls in with a middle-aged couple, Joe and Betty, who operate a fish market, and becomes their surrogate son. Their actual son, a frustrated TV comic named Danny Dime, is marooned in the southwest and has been forced to hire himself out to the FBI or CIA, he is not sure which, and has taken to sending his parents increasingly bizarre and obscene videotapes of himself and his family. Nick, a carefree Oedipus through Betty’s overindulgence, tries to cope with Danny’s self-destructive madness when Danny returns home, fleeing from his implication in a catastrophic military exercise. Before Nick can extricate himself from this Freudian tangle, Danny has destroyed not only himself but his son and parents as well, with an assist at the end from goodfellow Nick.

Pomerantz’s dexterity and control throughout are remarkable; his bravura talents infuse his strong tale with warmth as well as irony, wild humor as well as horror. He has given us a coruscating fable of the underside of the American Dream.

Edward Pomerantz has written two plays, Brisburial and A Long Story, as well an adaptation of the Erskine Caldwell novel, Tragic Ground, called Shenanigans. In addition, he has written over thirty commissioned screenplays and teleplays for movies and TV. He has received several grants and prizes for his playwriting. Pomerantz's screenplay, "Caught" is based on Into It and released by Sony Pictures Classics.