A Poetic Journey To Spirituality
& Self-Discovery 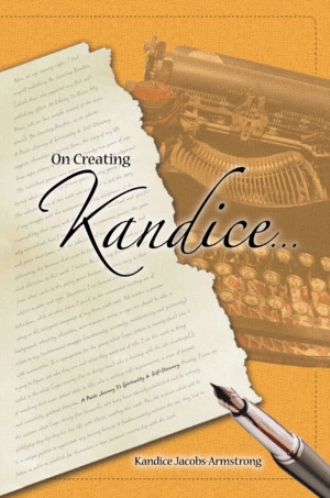 On Creating Kandice: A Poetic Journey To Spirituality & Self-Discovery, chronicles in lyrical form, the story of my life from approximately ages sixteen to twenty-two years of age. The individual poems were organized to read as a story - the story of my struggle with the maturation process; acceptance of the responsibility that comes with the transition into adulthood and specifically womanhood; how I learned to wield its numerous powers; the pain and peace that comes with the submission of one's life to Christ; and ultimately, the balance that must be found in order to succeed as a young adult Christian in this world.

This book is certainly appropriate for the young adult (ages 16-24) who is trying to figure out who they are and what they want out of life. I see this work as being useful to the adult (ages 25-34) who is dealing with the life challenge(s) of reaching that more "settled" state in life; who is seeking self-improvement, a sense of purpose and essentially spiritual direction. Finally, I even see the mature adult (ages 35+), who may have already established and be actively solidifying day-by-day his/her life with Christ, reading this work.

"How wonderful to discover the new and refreshing voice of Kandice Jacobs-Armstrong. On Creating Kandice: A Poetic Journey To Spirituality & Self-Discovery is definitely new wine in new bottles. How poignant to travel the difficult road of life only to find that Light that lights up all our lives. We all are certainly wishing Kandice continued success on her Poetic Journey."

Kandice Jacobs-Armstrong has garnered a stellar reputation as an inspiring & thought-provoking speaker, as well as an unmistakably insightful poet -- earning her an endorsement from famed poet and (then) Distinguished Professor of English at Virginia Tech, Nikki Giovanni. The southern roots, often referenced in her work, are a direct result of her upbringing in her native Jacksonville, Florida as well as the time she spent residing in the great state of Texas.

Beginning in 1999, she performed regularly in her hometown – first as a vocalist, at events hosted by the then Positive Third Productions, and later as a featured poet for the monthly Nokturnal Escape Entertainment's: Poetry As A Second Language spoken word events. From 2001 – 2005, she co-founded and managed a Florida corporation, Genius Minds, Inc., an arts administration business.

A true Renaissance woman, Kandice is a lover of learning. Thus, she is a proud graduate of Texas Woman's University, where she earned a Bachelor of General Studies (concentrating in English, Business & Sociology and graduating magna cum laude), and of Florida State College at Jacksonville where she earned an Associate of Science in Funeral Services. However, despite any academic or professional accolades, Kandice firmly defines herself as a committed follower of Christ. Having recently celebrated this publication's tenth year in circulation, Kandice remains all the more committed to passionate pursuit of purpose and fulfillment of her calling to "equip [her readers] to live life abundantly and leave a lasting legacy!" To learn more about the author or book her to speak, visit https://www.kandicejacobscreations.com.