World War II
through the Eyes of a Radio Man 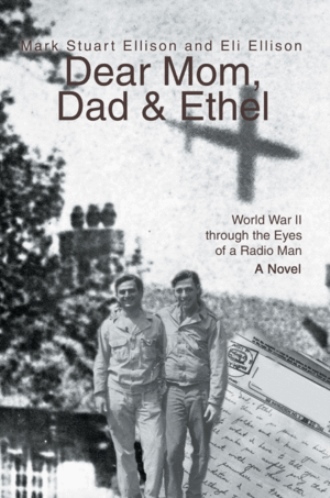 I located Room 212, inserted the key into the door, and opened it. Inside was a neat, comfortable space equipped with a queen-sized bed.

My knees buckled. To a lowly corporal accustomed to field tents and bunkhouses, this chamber was a veritable cornucopia of the senses. The white sheets were imprinted with a floral design of bright reds, yellows, and blues, on top of which lay a matching, down quilt. Thinking that I’d died and gone to GI heaven, I fancied myself a four-star general.

Rapidly stripping to my undershorts, I gleefully jumped into bed and got under the covers. I tried to lay still, but my eager legs were twitching with nervous anticipation. I began fumbling with a rubber.

Jeez, I don’t know why I can’t get this crap on. I’ve practiced with it a thousand times. First time jitters, I guess. Oh, what the hell. I’ll get it later. First things first. Conversation and foreplay before screwing. Relax, Don. You’ve hit the jackpot.

Five minutes later, I heard a gentle knock at the door. It was Sally.…

Soon we were devouring each other. For five minutes, the bed squeaked fast and furiously. Our sustained, rhythmic panting rapidly reached a crescendo, followed by somnolent sighs. Our libidinous aria over, we grew silent, and I settled down to the most peaceful sleep I had experienced since joining the Army.

The next morning, after enjoying a wonderful breakfast, Sally and I shared a cab ride back to our respective camps. During the drive, we made plans for a future rendezvous.

I couldn’t get enough of her. For a naive Bronx boy who barely knew the meaning of the word “petting,” making love was very intoxicating. It was like Jack’s peanuts: the more you had, the more you wanted—and it was one helluva break from base routine.

The captain reached into the folder and handed me a letter I had written to a friend in another outfit.

“Quix, your language is unbelievable. I’ve seen tamer stuff on bathroom walls.” Captain Jones eyed me quizzically. “Would you write that way to your mother?”

“No, sir. But I wasn’t writing to my mother,” I protested. “May I speak freely?”

Captain Jones wearily rolled his eyes. “Go ahead, but make it fast.”

This line of questioning had really gotten me thinking. I had been oblivious to the extent to which my speech had coarsened over the past two years. Before entering the service, I rarely cursed, even when I was with my best buddies. My parents didn’t tolerate swear words around the house, and they would have been horrified to learn of the casual way in which I now employed them.

“Well, sir, you’ve gotta realize how it is when a bunch of fellas get together, especially when they’re in a strange place far from home. When you’re eating or going to sleep, it’s always fuck this, fuck that, fuck everything. Sir!”

The captain’s taut facial expression loosened, and his lips curved slightly upward. “You may find this hard to believe, Quix, but, once upon a time, I was your age. I entered the Army as a private, so I’ve been in the mess halls and the bunk houses, and I know the score. By the way, when it comes to foul language, some of the officers are worse than enlisted men. I’ve been known to occasionally use a salty word or two myself.”

“I’m glad we’re on the same page, Quix, but there’s something else you need to know. There’s a big difference between talking trash and writing it on official U.S. government stationery. When you’re sending V-mail, you’re not just speaking for yourself. You’re representing the United States of America, and it’s my job to help make sure that her reputation isn’t tarnished. Understood?”

Tonight is Christmas Eve, and this is the big holiday of the year in Belgium. New Year’s Eve is not celebrated here, and, therefore, the night before Santa makes his popular visit garners the number one spot.

However, Belgium is very serious tonight, as she has been for the past few days. With one eye, the people will be enjoying the gaiety and the festivities, and with the other they’ll be watching all the doors and windows for fear that the Germans may return. The Germans are now in their front yard, and they know it only too well.

I recently received a sleeping bag. It is a nice, handy item to have on a cold night, although our rooms are presently well-heated.

Received a letter from Jerry which took an awful long time to get here. He was about ready to go on combat missions, and, perhaps by this time, he has had a taste of it. He praises his pilot, but he’s not so keen on the other members of the crew. His brother Murray is doing fine and has been awarded the Distinguished Flying Cross Air Medal and the Second Oak Leaf Cluster.

Jerry is in a Liberator, and I hope he’ll be all right. I’ll be sweating his missions out with him. I know he’ll pull through.

On a grey, chilly afternoon, I stopped off at the Café du Tank. Today, my shift wouldn’t begin until 4 p.m., giving me enough time for both a hot cup of coffee and a long-awaited shower at the public baths. I spotted a familiar figure peering over a magazine at one of the tables.

“Donnybrook! Long time no see! How are ya?”

Our embrace was warm and instantaneous. Although we rarely displayed such physical affection, it was quite understandable: we hadn’t seen each other in nearly two years. We eyed each other’s insignia.

“Not too shabby yourself, Buck Sergeant. C’mon. Siddown.”

“Ordered a few minutes ago. Don’t know why it’s taking so long.”

“Your French has gotten a lot better, Donnybrook.”

“With your language skills, you probably have to beat ’em off.”

“Nah. I get out now and then, but I’m usually so bushed after work, I don’t feel like looking for women.…I guess you know I got transferred to a demolition unit after we went AWOL.”

“Heard a rumor like that, but I wasn’t sure if it was true.”

“I’ve been in a lotta different outfits. They sent me to bomb school for some crash courses. Shells, mines, V-weapons, you name it—I’ve seen ’em all. Been around a lot, too: Normandy, Italy, Belgium.”

I noticed that my friend had aged a great deal over the past two years. Ken was only twenty-seven, but his temples had already gone grey. The lines were etched deeply into his forehead, and there were “crow’s feet” around the corners of his eyes. He hadn’t shaved in several days and smelled of cigarettes…

"Hitler might be able to hold out a long time, Donnybrook.”

“No way. We’ve got mastery of the skies. He’s outnumbered and outgunned.”

“I wouldn’t count him out so soon. He’s got some serious shit up his sleeve.”

Ken’s eyes narrowed into a cold glare. He leaned over to within a few inches of me and softly deadpanned, “You think the V-2’s are scary? Hitler’s working on rockets that can hit any place on Planet Earth. He’s already got Messerschmitts that can best five hundred miles an hour and chew through anything...

"I enjoyed Dear Mom, Dad & Ethel so much I could hardly put it down. It ought to be widely read as an excellent way of recalling World War II."
-Hans L. Trefousse
Distinguished Professor Emeritus of History
Brooklyn College and Graduate Center of the City University of New York

"Dear Mom, Dad & Ethel paints an absorbing picture of the daily life of America's greatest generation. Vets will find themselves reliving their own experiences-the boredom, the loneliness, the fear, and the role of fate in life and death. For the rest of us, Dear Mom, Dad & Ethel is social history at its best."
-Dr. Stanley J. Michalak
Senior Associate, Foreign Policy Research Institute, Philadelphia
Professor Emeritus of Government, Franklin and Marshall College

"Dear Mom, Dad & Ethel delicately mixes fiction and history to tell the story of an American air corpsman during World War II. His precious letters enhance a grand book deserving warm appreciation. People from my hometown will be as moved and fascinated as many Americans who will, no doubt, eagerly read it."
-Jacques Wynants, Belgian Historian
Author of Verviers 1940 and Verviers Libéré

On October 7, l942, Don Quix enlists in the Air Corps. He's slated to be an aerial gunner, but his flying dreams are shattered when he's caught AWOL with buddy Ken Jackson. Don manages to become a radio truck supervisor in a fighter control squadron while Ken goes to a demolition unit.

As an army engineer, Ken barely survives D-Day on Normandy's "Bloody Omaha." During a baseball game in a French forest, Don moves his head slightly, saving himself from a sniper's bullet.

Arriving in Verviers, Belgium in September 1944, Don and his fellow radio men endure frequent buzz bomb attacks. Due to a miscalculation in army strategy, they find themselves on the front lines during the Battle of the Bulge.

Don's reunion with Ken, now a tech sergeant with a bomb disposal outfit, is marred by tragedy, dampening Don's torrid love affair with beautiful seamstress Denise Vervier. Denise's husband, sent to a forced labor camp in 1940, is presumed dead. When he unexpectedly returns, Don and Denise face a heartbreaking choice.

Mark Stuart Ellison has worked as an attorney, reporter, and freelance writer. His articles have been published in Physicians Financial News, Dutchess Magazine, and The Poughkeepsie Journal. Eli Ellison was a radio truck operator with the 327th Fighter Control Squadron in Western Europe from 1943 to 1945. A retired New York City teacher, he died in 2004.