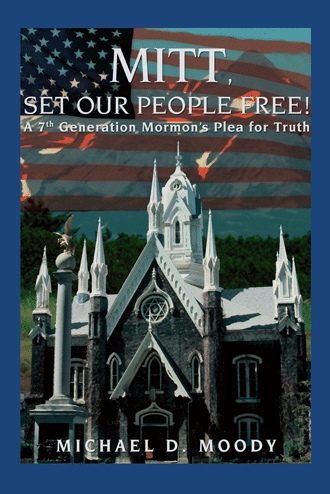 In an open letter to Mitt Romney, Michael D. Moody, a former BYU classmate of the 2008 presidential contender, discusses the hypocrisies of Mormonism and delivers an insider's look at politics and the Church.

Moody reveals the challenge in determining where Mormon hyperbole ends and hypocrisy begins. How outlandish is it, for example, that after early Mormons defended polygamy, contemporary Mormons crusade against nonstandard marriage in America? Although it's not out of character, Moody contends that in the grand tradition of lying for the Lord, Mormons have been untruthful about polygamy for decades. These hypocrisies relate directly to the conniving mind of Joseph Smith and the evil he incorporated into his cult.

Millions of Mormon descendants are psychologically trapped in a multigenerational compound dating back to the very founding of Mormonism. Families are bitterly divided when some members escape over the emotional barbed wire but reach back to grasp the hands of those they love.

As a contemporary war rages between those who know the "New Mormon History" and those who live in a programmed state of denial, only the dynamic leadership of a highly qualified, educated, and savvy man like Mitt Romney can free members from the Great American Cult.

Michael D. Moody graduated from BYU with a BA in political science and a master's in public administration. A former Army Captain and decorated Vietnam veteran, he interned at the U.S. Supreme Court before returning to Las Vegas to enjoy lengthy and often overlapping careers in government, politics, education, finance, television, and radio.