and The Deaths of 25 Journalists 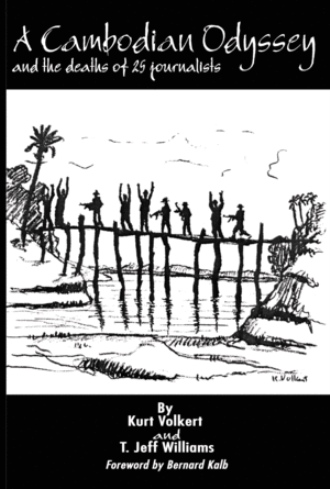 This is a question that still bluntly assaults every reporter and cameraman covering war anywhere in the world. When to stop? Where to stop? Ever to stop? We lived with that challenge all during the war, yet so many of us felt invulnerable—was it innocence, arrogance, the intoxication of war? We were objective reporters, weren’t we, not combat soldiers. We gave ourselves exemptions from death. We armored ourselves with naiveté.

In all, this book is a tribute to all slain journalists who brought the war to your living room; some caught in a firefight, some shot out of the sky, some who vanished, some executed. Yet even while the shooting was going on, there was a war about the war, about whether the United States had misread history and the dying and killing was all a waste. Those post-mortems would come later, too late to end the killing.

T. Jeff Williams was a journalist in Asia for 10 years, from 1962 to 1972, covering news that ranged from the overthrow of Indonesia’s President Sukarno to the Vietnam War. He was first an Associated Press correspondent and then became a CBS News correspondent. In 1970, he was the only American journalist in Cambodia when a right-wing coup d’etat toppled chief of state Prince Norodom Sihanouk. Williams covered the expanding war there in which 25 foreign newsmen were killed in less than six months. In 1972 Williams was reassigned to the CBS News bureau in Chicago. From there he covered the Mid-West, including the American Indian Movement takeover of Wounded Knee. He is the author of two novels, a history of the Portuguese colony of Macao, and co-author of the recently published history of Cambodia in 1970, entitled A Cambodian Odyssey and the deaths of 25 journalists. He lives with his wife and children in the San Francisco Bay Area.

Kurt Volkert spent nearly 30 years as a CBS News cameraman, covering events through Asia, Africa and Europe. In 1970, then based in Tokyo, he accompanied CBS correspondent George Syvertsen to cover the conflict in Cambodia. Less than two weeks after their arrival, Syvertsen and seven other CBS and NBC crewmen were killed. Kurt, who was not with them that fateful day, spent weeks seeking to determine the fate of those captured. By interviewing villagers, he learned that the five had been executed. Twenty-two years later when a U.S. Army team went to Cambodia to search for the remains of those missing, Volkert accompanied them. The carefully drawn maps he had prepared from his interviews were instrumental in finding the remains. Volkert is co-author of the recently published history of Cambodia in 1970, entitled A Cambodian Odyssey and the deaths of 25 journalists. Living in Germany with his wife, Volkert has launched a successful new career as an oil painter.