THE TROUBLE WITH A SMALL RAISE 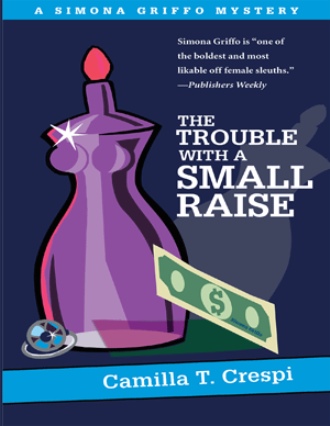 Simona needs a raise badly, but her boss is too busy with HH&H's new advertising campaign for a fancy perfume to give her the time of day. She gets up early one morning to confront Fred one last time only to find him lying on the plush carpet of his office murdered. Who is the killer and why? Maybe it's the art director who hungered for Fred's job. Or the jilted ad executive. Or the secretive CEO. Or the overworked Office Manager. There are too many suspects to sort through, but when the cute detective assigned to the case discovers incriminating evidence in Simona's desk, she knows she better find the murderer fast.

"Replete with well-drawn characters Nothing spoils the fun of this thoroughly engrossing whodunit, [which introduces] one of the boldest and most likable female sleuths."
-Publishers Weekly

"Small Raise presents a complicated plot and a lot of intriguing ad business colleagues, and introduces Simona's "When in doubt, cook" philosophy. My kind of woman."
-Joyce Christmas, Mysterious Women

"Crespi has a light touch with location and atmosphere, and her characters are far from the staid characters often found in series books."
-Ellen Nehr, Murder Ad Lib

"Ms. Crespi truly shines in the humor department. Realistic and richly detailed Crespi will undoubtedly win a following among those who become acquainted with her heroine."
-Stevanne Carter, Mostly Murder