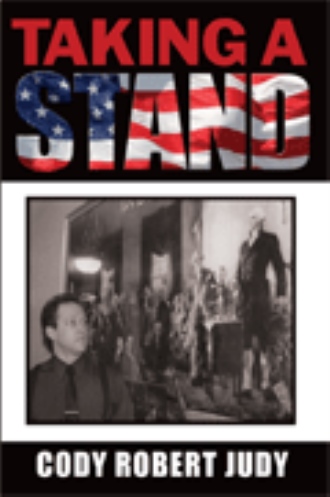 TAKING A STAND PREVIEW YOUTUBE - http://www.youtube.com/watch?v=vaZvGHiNYHY Walking through your pain will be your most rewarding journey. Healing waits for you on the other side. We all have different prisons to walk through. Our spirit requires the tests to refine us and with the help of God I found a road less traveled through my Personal Prison experience. One in five Americans are now incarcerated, on parole, or probation struggling with a Justice System that just doesn't seem to hear or listen, but it can be done. I wrote this book detailing my experience and journey to help you, as well as to help Reform our Judicial System many are finding corrupt. Complaining without Action is part of the problem. Your vote counts and I am one who changed my way of thinking about our Political System deciding no matter what, I was going to take a stand for our U.S. Constitution. Many believe their political activism is futile, but I have made a difference on the Record in the Judicial, Legislative, and Executive Branch of our Government and in that course changed U.S. History. It hasn't come easy and has not paid well. As a 3X Presidential Candidate now, and having run for Congress and the Senate, I have become much more aware about the possibilities for our Nation if we will engage those who don't think they count. Many think they can't vote if they have a felony but the truth is most State allow those who are not currently incarcerated to Vote. Some States even allow absentee ballots in the Federal Elections. The journey I am on is not only a political journey but one that involves learning how to identify the spiritual path for your particular person. It's worked for me and I know it will work for you if you will read this book. reminds me of a Dream I had in Prison near 25 years ago now. I was walking through shit so deep it was up to my eyeballs. The ONLY way I had to even breathe was through a straw that extended from my mouth up and went straight up to Heaven. It was the only way I could survive 3018 Days . Gradually as I kept walking the shit receded and I walked out . Then I woke up, and was so grateful to know there was a way out. One day at a time. Follow me on Twitter @CodyRobertJudy and Facebook Cody Robert Judy and join me in Recovery for America.

TAKING A STAND - New YOU TUBE Commercial http://www.youtube.com/watch?v=vaZvGHiNYHY More than anything your spiritual journey needs to be identified. This book will help you chart a path and focus in on your spiritual healing making your life meaningful and your journey much more vivid in your eyes of Heaven. From the bottom of the barrel in prison, Cody Robert Judy has made his way and helps you to identify your strengths by confessing your weaknesses. The whole book is a Teaching Moment designed to help you find answers that are true and meaningful. America's history is rich with colorful characters whose outlandish escapades carved their names indelibly on its rugged, untamed landscape. Cody Robert Judy is the only Candidate for President in America to take both Sen. John McCain in 2008 and Barack Hussein Obama to Court taking a stand on the eligibility requirement for the Office of the President. Cody's latest action continues even today in the United States Supreme Court Case NO. 12-5276 & 14-9396 with a Special Individual Justice Petition to Justice Gorsuch. In 2010 Cody became the first Presidential Candidate in American History to testify under oath against another candidate unqualified by the Constitution's requirements. Cody's Stand Enter Cody Robert Judy blazing fire from the west - a modern day Revolutionary George Washington, capital P for Protester, whose Book Of Mormon (B.O.M). quandary framed him in 1993 and landed him in more Free Speech hot water than any native son could be expected to handle with the Constitution under assault. With no one to help, he faced the hell America will face without the Constitution and his story is but a glimpse of what is to come if America doesn't wake up and read this memoir of truth that eclipses the dark propaganda of security and slavery for the dawn of Constitutional vitality! As a political prisoner for 8 years Judy emerges bloodied but unbowed citing the unconstitutional union of Church and State in the case that pitted the State dictating what Americans of Faith will be horrified of in Church where free speech has the greatest latitude for religious sentiment. Happening in America, because of the anti-Constitutional agenda of elected government seeking to control your very lives and fortunes..America is waking up to see the Constitution burning. Citing Lincoln's third party status in his bid for the Presidency and Washington's thirteen strikes before finally hitting one out of the park, Judy claimed he had complete confidence in his fight during a 2002 run for U.S. Congress,2004 bid for U.S. Senate, and in 2008 as a Presidential Candidate, and these were just pieces of the puzzle in serving intelligence for America . Cody, an unsung American Patriot took on the elite in the face of over whelming odds believing as KEY to America's freedom and liberty the U.S. Constitution must stand. Cody roars, "Taking A Stand is the most important thing we can do for our childrens brilliant future!" Conservative Independent, platform for U.S. Senator in 2010,(www.codyjudy.us) as a political activist fighting for the principles of the United States Constitution, Cody Judy took a stand on the Qualification issue of first John Sidney McCain and then Barack Hussein Obama challenging them in the Judicial Branch of our Government as no other candidate has in history. No U.S. Senator has taken a stand like Cody Robert Judy as he alone did not discriminate between black or white but focused on the Qualifications of a Constitutional Principle for the Office of the President and realized the ominous signs of unconstitutional law we are seeing as the affects of the U.S. being seized upon by a social marxist regime as Communism rising like a bear in the U.S. and the U.S. domestic enemies takes on a whole new meaning as government TAKES a look at YOU! Can we look past the audacity of hope, and learn something about the irrepressible spirit and courage that a man named Cody Robert Judy has tread in our Forefathers footsteps, who defined the birth of our nation as rebels oppressed by Tyranny and Government astray in hope for man; - in this brash iron man - America's envelope continues to be pushed, freedom sings and liberty rings as America is waking up to realize they have been deceived by those they trusted and Cody Robert Judy a man of humility before God whose testimony is that of the angels trumpet takes a stand for all we had hoped elected leaders would but haven't! This work is Cody Robert Judy's take on The Truth. It may raise a few eyebrows and cause the shaking of heads, but its purpose in the end is a worthy one answering the question of 'Why'. After all, as a profoundly controversial figure is said to have once said, '...and the truth shall set you free'. Taking A Stand- A story of Love,Leadership, and Loss profound in Sacrifice. ' Honor, Respect, and Cherish your Freedom, for it carries the Blood of those who gave it to you.' Abraham Lincoln. Taking A Stand- The Conservative Independent Voice Join: Cody Robert Judy Facebook 1- 2016 - Cody Robert Judy for President https://www.facebook.com/CodyRobertJudyForPresident2016 2-Personal - Cody Robert Judy https://www.facebook.com/codyrobert.judy Twitter @codyrobertjudy Web Site: www.codyjudy.us Email cody@codyjudy.us

Cody Robert Judy born 1965 in Idaho Falls, ID. is an American who is a published author, and has run for several public offices, most recently in The United States presidential election, 2008, Cody Robert Judy was a High school graduate of Box Elder High School in 1984 and graduated from Utah State University in 2002 with a Bachelors in Psychology and a minor in Sociology with significant study in Political Science and Business. In 2002, Judy ran as a write-in candidate for an open Utah seat in the U.S. House of Representatives. In 2004, Judy ran as a write-in candidate for the United States Senate against Senator Bob Bennett. In 2008, Judy ran for President of the United States as a write-in candidate in Utah. In 2010 Judy is now running for the same seat he did in 2004 U.S. Senate against Senator Bob Bennett (Utah) In 2012 Judy ran for President as a Democrat taking on Barack Obama New Hampshire Supreme Court, Georgia Supreme Court and United States Supreme Court 2014- Judy's current case is ripe Judy v. Obama 14-4136 In the 2008, Judy filed a lawsuit against John McCain and the Republican National Committee challenging McCain's eligibility to be President on the grounds that McCain was not a "natural-born citizen". The case was declared moot after McCain lost the 2008 presidential election. Judy filed the first Brief of Amicus Curiae on behalf of the Petition in Captain Barnett v. Obama constitutionally challenging the "natural born citizen" clause of the U.S. Constitution in the case of Barack Obama Presidential Candidate files Amicus Curiae Brief. Esq. Orly Taitz representing Plaintiff Barnett v. Obama Published Published in 2008- Taking A Stand-The Conservative Independent Voice ,Google Book Search ISBN# (iUniverse 2008) 978-0-595-63198-8 "Can we look past his audacity and learn something about the irrepressible spirit and courage that defined the birth of our nation by rebels of oppression - in this brash iron man - America's envelope continues to be pushed, freedom sings and liberty rings! This work is Cody Judy's take on The Truth. It may raise a few eyebrows and cause the shaking of heads, but its purpose in the end is a worthy one answering the question of 'Why'. After all, as a profoundly controversial figure is said to have once said, '...and the truth shall set you free'. Taking A Stand- A story of Love, Leadership, and Loss profound in Sacrifice. 'Honor, Respect, and Cherish your Freedom, for it carries the Blood of those who gave it to you.'Abraham Lincoln." Cody's blog at www.codyjudy.blogspot.com is a staple of Liberty celebrating over 175,000 views now Cody Robert Judy Supplies Dossier on behalf of 2008 Presidential Candidate Alan Keyes Letter to United States Supreme Court Dec 28th,2008 Letter to U.S. Supreme Court Justices regarding eligibility of Obama.. Provided an Amicus Curiae to U.S. Supreme Court Amicus Curiae to U.S. Supreme Court in Philip J. Berg, Petitioner v. Barack Obama, et al.,. Buisness Cody Robert Judy 1984-86 expert carpenter- Built a home and barn on 2.5 acres in Caliente Ca. owner builder/homestead 1990-91. 1985-1992 Professional Horse Trainer specialty in Arabian Show/ and Dressage to Grand Prix levels 1986-1992 Built/Owner operator Creative Country/ a co-op gift boutique 7 stores/125 items 1986-1992 Built/Owner operator Golden West Training Centre- trained/and teaching horsemanship?Hollywood clients 1997-2002 worked for Northern Outfitters/and/ SandStar Family Entertainment in leadership positions. 2002- "04 Built/Owner operator Hang Ten Tan & Coffee Boutique 2009- current Owner operator USA Legacy Entrees/ home delivery of fine meats. Taking A Stand- The Conservative Independent Voice -http://www.youtube.com/watch?v=vaZvGHiNYHY Join: Cody Robert Judy Web: http://www.codyjudy.us Twitter- @codyrobert judy Facebook 1- 2016- Cody Robert Judy for President 2016 -https://www.facebook.com/CodyRobertJudyForPresident2016 2- Cody Robert Judy - personal - https://www.facebook.com