COMING OUT OF FUNDAMENTALIST CHRISTIANITY

An Autobiography Affirming Sensuality, Social Justice, and The Sacred 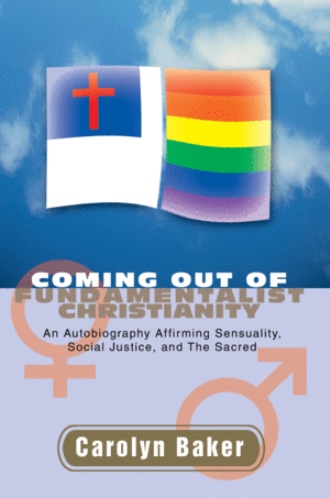 Coming out of Fundamentalist Christianity is an autobiographical account of one woman's journey from growing up in a rigid, troubled fundamentalist Christian home where she discovered at an early age her attraction to women, and how she survived and fled the oppression of her family of origin, later coming to terms with and joyously embracing her sexual orientation and a life-affirming spiritual path. It is an account of foolish errors and wise choices on the way to embracing all parts of herself and her total humanity-the people, places, and experiences that shaped those choices and helped form and inform who she is today. Her current deep engagement in social justice activism is informed by and echoes her daunting journey and reverberates through the last section of her book as she takes to task not only Christian fundamentalism, but what she considers the naïve and irrelevant politics of the gay and lesbian community. Reflecting on her personal experience she states, "As a young-adult fundamentalist Christian, agonizing over my sexual orientation, I might have found liberation, comfort, and affirmation had I had access to a book that blessed it and illumined its compatibility with my unquenchable heart's desire for the sacred."

An honest account of a woman accepting herself as a lesbian despite a fundamentalist Christian upbringing. As a gay couple we feel less isolated because Carolyn isn't afraid to criticize the LGBT community for their lack of interest in compelling issues beyond same-sex marriage and AIDS.
-Philip Botwinick & Tom Nielsen, Organizers of the 2006 Local Solutions To The Energy Dilemma Conference, NYC,Woodhaven, New York

Dr. Carolyn Baker's riveting personal experience and keen intellect combine to illuminate the untruths, oppressions and mean-spirited culture that pervades our society, politics, and religious institutions. "Coming out" stories are legion, and each and every one is to be celebrated. Baker goes even further. It is not only a journey of passionate self-discovery of one's being and values. It is also an analysis of those cultural and religious systems which on a daily basis, choose to oppress or to honor the diversity and inherent value of each human being. Read, sense, know, and act.
-The Rev. Dr. Susan Beehler, El Paso, Texas, Retired Ordained Clergy, United Methodist Church

Carolyn Baker grew up in the Midwest and resided in Colorado and California for most of her adult life. She holds a Ph.D. in Health and Human Services and a Masters in History. She has worked extensively in non-profit administration and was a psychotherapist in private practice for nearly two decades. In addition, she is the author of Reclaiming The Dark Feminine: The Price Of Desire and The Journey Of Forgiveness: Fulfilling The Healing Process. In 2006 she published U.S. History Uncensored: What Your High School Textbook Didn?t Tell You. For the past eight years, she has been an adjunct professor of history and is currently managing her website at www.carolynbaker.org as well as writing, traveling, and lecturing.