A Wish In Time

by Laurel A. Bradley 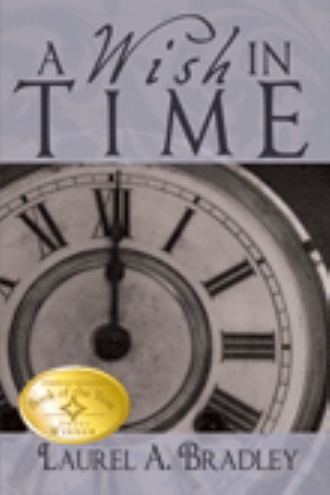 In eighteenth century Scotland, Magda McClellan, eight months pregnant, is granted one wish from Auld Annie, a wise woman accused of witchcraft. But Magda declines her wish because she is perfectly happy; besides, she doesn't believe in witches. Little does she know how that refusal will change her life forever.

In twenty-first century New York, Maggie McDonald and her husband desperately want to have a child. While they wait for a procedure at a fertility clinic, a Scottish nurse named Annie promises to grant them a baby if it is their wish. When Maggie awakens, she finds herself round with child in eighteenth century Scotland and panic sets in.

Meanwhile, Magda has also been catapulted through time. She wakes up in a hospital bed in New York  but she's not pregnant anymore. When she goes home with a man who claims to be her husband, she searches for clues to the identity of Maggie McDonald, whose body she now inhabits. Why has Magda been transported to this strange place and time? And why is she no longer pregnant?

As the two women become familiar with their new worlds, they find themselves on emotional paths of self-discovery. Join Maggie and Magda on their spellbinding journey as they attempt to return to their past lives  before it's too late.

Laurel Bradley believes that wishes really do come true. After eleven years of writing, Bradley has finally achieved her dream of seeing her stories in print. A Wish in Time was a finalist in both the 2007 National Indie Excellence Book Awards and 2007 Best First Book category of More Than Magic. Her Crème Brulee Upset, a contemporary romance novel, was released in early 2008. Bradley, who lives in Wisconsin, graduated from the University of Wisconsin-Eau Claire with a bachelor?s of arts in English. When she isn?t reading, writing or attending her children?s sporting events, she paints with watercolors and decorates Ukrainian Eggs.