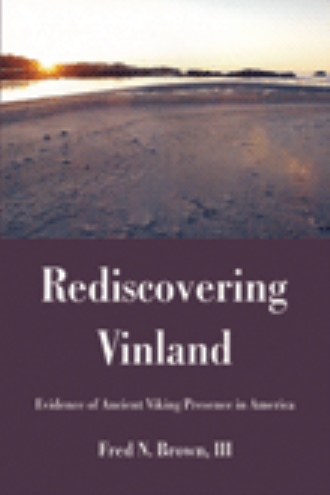 For over 100 years, people have debated where Vinland is located. This book describes what sagas said, where Vikings landed, what interaction they had with Natives, and what legacy they left Indians and early European colonists. Fred Brown uses 33 years of studying Viking accounts of journeys to America, genetic information, archaeological evidence, Old Norse language remnants, and sailing experience to pinpoint yet another Viking incursion in New England. His detective work to find Vinland is brilliant and masterful.

"While you and I play golf, Fred Brown spends his off-hours researching our past. After reading about possible areas visited by the Vikings and descriptions of America in Viking legends, in 1976 Fred ventured out by boat using Viking descriptions and archaeological finds in that theorized area. He investigated documents from English settlers in the 1600s about the light-skinned Indians, metal and smelting use by early Indians, odd linguistic similarities to northwestern Europeans, and a peculiar resistance to tuberculosis among Indians, genetically common to Europeans. He concluded, and is not the only researcher to do so, that the Narragansett and Wampanoag Indians of the region encountered by early English settlers were, in fact, descendants of mixed Indian/Viking populations."
-Editor, Diane Holloway, Ph.D.

Fred N. Brown, III, an Arizona aircraft industry toolmaker, has researched possible Viking landing sites in New England for 33 years as an avocation, and has created a website. Diane Holloway, Ph.D., author of The Mind of Oswald, American History in Song, and Who Killed New Orleans edited this book.