A Bridge from Awareness to Action 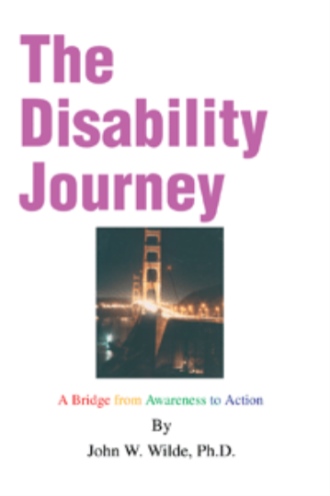 The Disability Journey addresses a subject that is at once timely and timeless, since disabilities will always be with us. Inevitably, disability awareness will become increasingly important to our society with each passing year.

An insightful disability resource, The Disability Journey offers the wisdom, insights, and guidance to make your crossing the bridge from awareness to action a reality.

Dr. John Wilde is a counselor and professor, and founder of EDU-QUEST, a consulting company that provides disability trainings for government agencies and businesses throughout the United States. Because of his knowledge of disability rights and Chinese culture, the United Nations tapped his unique expertise to improve China's disability laws. The author completed an extensive report titled A Comparative Study of Disability Laws in China and the USA in which he offers suggestions on how China might develop more equitable disability rights.

John Wilde is a professor and counselor at City College of San Francisco where he teaches Perspectives on Disability Rights. Wilde holds a Ph.D. in Education, with an emphasis in rehabilitation, from Southern Illinois University, and has written two textbooks on disability rights.

Through his own consulting company, EDU-QUEST, Wilde regularly lends disability expertise to government agencies and businesses throughout the USA and China.

Having studied at the Beijing Language and Cultural University for over two years, he wrote American Culture: A Coursebook (World Affairs Press 2000), a popular college textbook used throughout China by students wanting an in-depth understanding of American culture. Wilde's knowledge of disability rights and Chinese culture caused the United Nations to tap his expertise. He completed an extensive report titled A Comparative Study of Disability Laws in China and the USA in which he offers suggestions on how to develop rights that are more equitable for people with disabilities.

Wilde is a popular speaker and often conducts seminars on disabilities. For information on attending one of Dr. Wilde?s presentations or to have him speak at your conference or conduct training for your organization, contact: