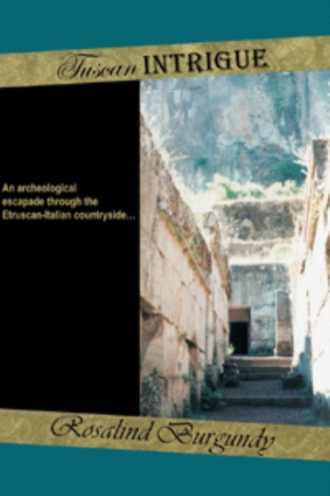 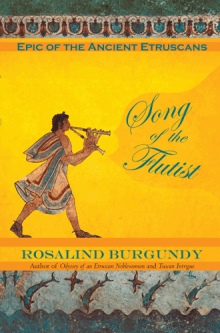 Song of the Flutist
Rosalind Burgundy
$20.95

Searching for the elusive criminals who left her famous father comatose after a bomb blast, cultural arts historian and quasi-archeologist, Amanda Oliver stumbles into a world of thugs, tomb robbers, obsessed archeologists and greedy collectors seeking a priceless Etruscan sarcophagus.

Putty Face's footsteps crunched on the gravel behind me. His erratic breathing, panting like a thirsty animal, paralyzed me. I opened my mouth to protest but no sound came. In a split second, the pressure of his hands on my back told his intentions. He shoved hard.

I pitched forward and the ground under my feet disappeared. My arms flailed clumsily when I grabbed out for something to stop my fall but met only air. His fierce thrust sped my descent and I tumbled uncontrollably, bouncing off bare rock outcroppings, each slam increasing my dizziness, bruising and weakening me.

Mercifully, I blacked out.

Rosalind Burgundy?s enchantment for the amazing Etruscan culture began when she worked with a renowned archeologist in Rome as Technical Illustrator and Curator of Etruscan artifacts. After more than thirty years as educator/lecturer, wife, mother, and world traveler, Ms. Burgundy returns to her life-long interest to create a trio of novels on that ancient civilization.

Tuscan Intrigue a contemporary archeological escapade, takes place in modern Tuscany and Umbria. The classic historic fiction, Odyssey of an Etruscan Noblewoman, and a three-generation family saga, Song of the Flutist, are set in Etruscan Italy, two thousand six hundred years ago. Ms. Burgundy divides her time between the Central Sierra in California and Palm Beach Coast in Florida.